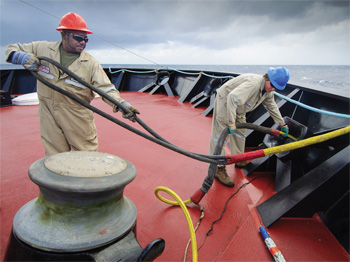 If you are new to the industry, and have never been on a large vessel before. It can be pretty intimidating. Especially when part of your duties include handling mooring lines. Basic Seamanship is a vital part of any deck ratings daily duties. As you become a seasoned mariner, your basic seamanship improves, not only in handling lines, but every aspect of your daily duties.

This article on Basic Seamanship: Line Handling will give you a brief overview of how to properly handle lines, What dangers to look for when line handling, and some proper terms when handling lines.

When line is removed from the manufactures coil, the line may be made up by either winding it on a reel or by Coiling Down, Faking Down, or Flemishing.

Flemishing a line is done in successive circles (one beside the other) with the bitter end in the center of the circle. Right-laid line is flemished clockwise, and Left-laid line counterclockwise.The easiest way to flemish a line is to lay down loosley on deck, then place hand in the center of the line and twisting (either clockwise or counterclockwise) until you have the appearance of a mat.

Heaving lines and messenger lines are small lines used to carry larger lines across from one point to another. Heaving lines usually have either a monkey’s fist or a rubber ball at the end of the line to make it easier to throw.

Mooring lines are the large lines used by vessels to tie it up. Each line has a name to describe its location.

The line that runs perpendicular to the vessel’s keel. This line is used to help hold the vessel close to the pier or dock.

Along with the bow line, are the lines used to stop the vessel’s after motion.

Means to use the lines to shift the vessel either forward or aft.

This gear is put around the line where the line goes through the mooring chock. Chafing gear protects the line from the chock. It is usually made of heavier canvas.

Hold the line– means do not allow the line to slip.

Check the line– means hold the line, but ease it off when

necessary so that the line does not part.

Slack the line– Means pay out the line so all tension is removed.

Take a strain– Means put the line under tension. 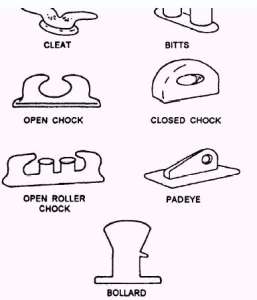 Your position should NOT be directly behind the line, but rather beside it. A line that is taking a lot of stress usually “creeks” this is an indication that the line is close to it’s breaking point.

Remember to ALWAYS take one round turn on the bitts before you start your figure eight.

If you are new to the industry, please remember that basic seamanship & safety are the most important factor when mooring a vessel. The senior crew members should be showing you the in’s and out’s of line handling as part of your vessel orientation.

Remember that no two vessels are the same. So even if you are a veteran of the Maritime Industry, you can learn something from someone who has been on the vessel longer.

We must keep each other safe out there. Stay Safe Shipmates!

If you are looking to take any maritime courses give MTC Maritime Training Center a try. They have some of the best instructors in the industry.

Rules of the Road Book